With revenues1 of R$ 1.1 billion, following the effects of provisions and other revenues, Fras-le generated a consolidated net added value of R$ 564.5 million in fiscal year 2017, which were distributed as follows: 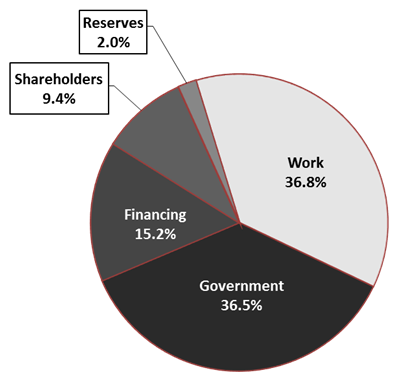 Fras-le was the first manufacturer of friction materials in South America to achieve the ISO 14001 Certification, known as the Environmental ISO. In addition, it is also the pioneering company in monitoring asbestos, initiated in 1983. Asbestos has been totally eliminated from Fras-le`s production line in early 2000.

In order to comply with the environmental legislation, Fras-le has in place some operations such as wastewater treatment, waster center, catchment system of particulate material and others.

Since the 90`s, Fras-le has in place the Environmental Management System (EMS), aimed at minimizing and preventing environmental impacts arising from the use of natural resources and the generation of residues, by developing systematic actions aimed at environmental conservation, as follows:

Throughout 2017, about 56 (fifty-six) million liters of wastewater were treated at Fras-le. The effluents come from toilets, changing rooms, restaurant, cooling towers, scrubber, and others. The treatment process is performed by adding chemical products and through biological treatment, in addition to filtration system to ensure compliance with the Emission Standard and current legislation.

Approximately 37% of this treated effluent was reused (18.806 m³). Below are the volumes of waste that have been reused over the last 5 years.

The Pro-Environmental Program consists in collecting and disposing friction materials following their use. The goal of this program is to ensure the adequate final destination of such used material so as to prevent possible environmental impacts. In 2017, approximately 1,200 tons of brake linings discarded by more than 460 customers (registered with the Program) were collected and correctly disposed. It was thinking about the Company`s responsibility towards the material it produces that the Program was created, in addition to offering our customers an additional and differentiated service.

Fras-le has in place the Waste Management Program, aimed at eliminating or reducing the waste originated from its production process, as well as at correctly disposing the waste susceptible of harming the environment.  The waste is treated in accordance with the standards required by environmental agencies and by the guidelines laid down in the Environmental Policy and Waste Management Program of the Company. In 2017, more than 9 thousand tons of waste was sent to treatment.  Of this amount, 46% was sent for recycling, 41% for co-processing, and the remaining amount was sent for specific treatment, depending on the type and composition of the waste.

The Company`s investments in environmental conservation reached, over the last five years, an average of R$ 6.3 million/year.  In 2017 fiscal period, these investments amounted to R$ 6.5 million.

With management practices targeted at the development, quality of life and education of its employees, Fras-le had, at the end of 2016, more than three thousand and four hundred employees worldwide. Currently, the activities aimed at human actions are planned and developed through programs and practices, based on the principle of “Respect and Recognition for the Individual”.

With this goal in mind, the Company provides numerous benefits to their employees, among which we highlight: health and dental services, food, private pension plan, transportation, daycare allowance, awards for time in the Company and others.    Some of these benefits include employees` family members.

Prepares employees for retirement through the learning of new activities after the end of their careers in the Company.

Encourages healthy habits and attitudes against alcoholism and drugs, providing plenty of activities to employees. These activities are aimed at promoting their health at the individual, social, professional and family levels, as well as at the workplace.

The program aims to disseminate the organizational culture and equality of opportunities while respecting diversity, whether ethnic, racial, creed-related, disability, age, or others.

Aims to identify and develop potential professionals to meet the demand for management positions in Randon Companies.

Enables to use people from within the Company in the vacancies offered by the Company, providing opportunities for professional growth.

Aims to qualify young talents through professional experiences and development actions promoting technical and behavioral improvement. It also aims to serve as a source of potential professionals who may be hired in the future, so they can build a solid career in the Organization

The main goal of this Program is to integrate and develop foreign officials aiming at technical retention and improvement. It also allows them to have a clearer understanding about the Company and integrating with the entire Fras-le team through Portuguese classes.

Aims to provide a multicultural environment by encouraging new visions and the practice of other languages. The Program welcomes young professionals from other countries, making teams more receptive to new cultures, in addition to adding different knowledge and new perspectives to business.

Fras-le`s practices include the Profit Sharing Program as a return for the engagement, dedication and commitment of each employee. This way, all employees are involved in pursuing better performance and achieving the goals set forth for the growth of the Company.

Strategically aiming to be continually ethical and responsible, Randon Companies disclose their principles and their Code of Ethical Conduct as a way to internalize its content, work employees` awareness, and prevent and minimize situations involving acts of corruption. The code shows how to behave not only in the Randon Companies but also at the personal level, how to report complaints, in addition to informing how to access the Channel of Ethics.  Moreover, it participates, implements and supports corporate citizenship programs, with a focus on education, culture and environment.  It counts on the organization provided by Instituto Elisabetha Randon (Public-Interest Non-Governmental Organization), which deals with the aforementioned guidelines related to corporate citizenship.

Among the social programs developed by the Company are:

Prepares children and adolescents in socioeconomic inequality for the exercise of citizenship. The students are 7 to 14 years of age and participate in various educational activities in the company`s own education center, which is fully equipped for this purpose.  Some are employees` children and some come from nearby communities.

The Program continues the actions implemented under the Florescer Program: students of 15 and 16 years old are offered the opportunity, during High School, to receive training as Administrative Assistants in the shift contrary to regular school hours, in partnership with SENAI.

Prepares young people (from 16 years old on) for the labor market  and in Randon Companies through professional and technical training.

It provides formal and organized support for employees who wish to voluntarily serve the community with their time and skills.