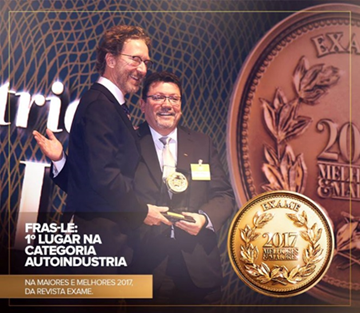 Fras-le took first in the AutoIndustry category – in the survey The Best & the Largest 2017, of Exame Magazine.It is important to note that the survey The Best & the Largest measures the performance of companies individually. Fras-le won the award because of its constant search for competitiveness and productivity in the domestic and foreign markets.

FRAS-LE is recognized by the customer Parker Hannifin, USA, for its excellence in customer service, delivery, product quality and continuous improvement in the delivery of brake pads for aircraft. 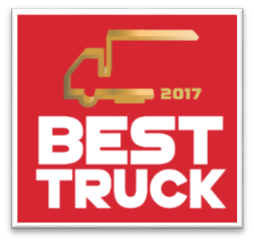 Fras-le is warded the BEST TRUCK 2017

FRAS-LE is awarded the BEST TRUCK 2017- Chosen by the Magazines “O Carreteiro” and “Transporte Mundial” and by the viewers of the show “Pé na Estrada”. Fras-le was the winner in the category Brake Systems.”

Fras-le is among the largest exporters of the State of Rio Grande do Sul in the 45th Export Award RS, organized by Conselho Prêmio Exportador RS, of Associação dos Dirigentes de Vendas do Brasil – ADVB-RS (Association of Sales and Marketing Managers of Brazil). The award aims to distinguish companies with the best performance over the last fiscal period and those which have developed the best strategies to sell their products in the international market, based on data from Ministério da Indústria, Comércio Exterior e Serviços  (Ministry of industry, Trade and services). The Company, which has manufacturing plants in the United States and China, won the award in the category  ‘Market Diversification ‘.

Fras-le received the award The Best & the Largest in Transport in 2017, in the category Parts for Trucks and Buses. The survey, carried out by OTM Editora (Transporte Moderno Magazine and TechniBus) looks at the transport segment in all its modes – road, rail, air, sea and waterway transport.

1st place in the socio-environmental category and 3rd place in the  economic indexes category, awarded by Distribuidora Automotiva, of Grupo Comolatti, in partnership with Fundação Getúlio Vargas; 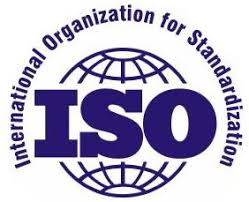 Fras-le participates in the revision of the Standards ISO 26865 and 26866, through the international committee organized by ISO (International Standardization Organization). The regulations establish procedures for braking efficiency test and durability test routines of friction materials. Fras-le has been a member of the Committee since its constitution in 2015;

Supplier Excellence Award, in Mexico, awarded by the companies SISAMEX and SUDISA;

Recommendation, by Fras-le Product Testing Lab, of certification to the ABNT NBR ISO/IEC 17025:2005 Standard, received from Inmetro. This standard recognizes the technical competence of testing and calibration laboratories;

The Best Brake Pad, handed out during event promoted by Editora Novo Meio. The results come from the survey carried out by Ipsos, which indicates the auto parts manufacturers that have stood out in the aftermarket.

Fras-le has been regularly present in the ranking of the Best Companies to Work for in Brazil, with the following achievements in Human Resources: